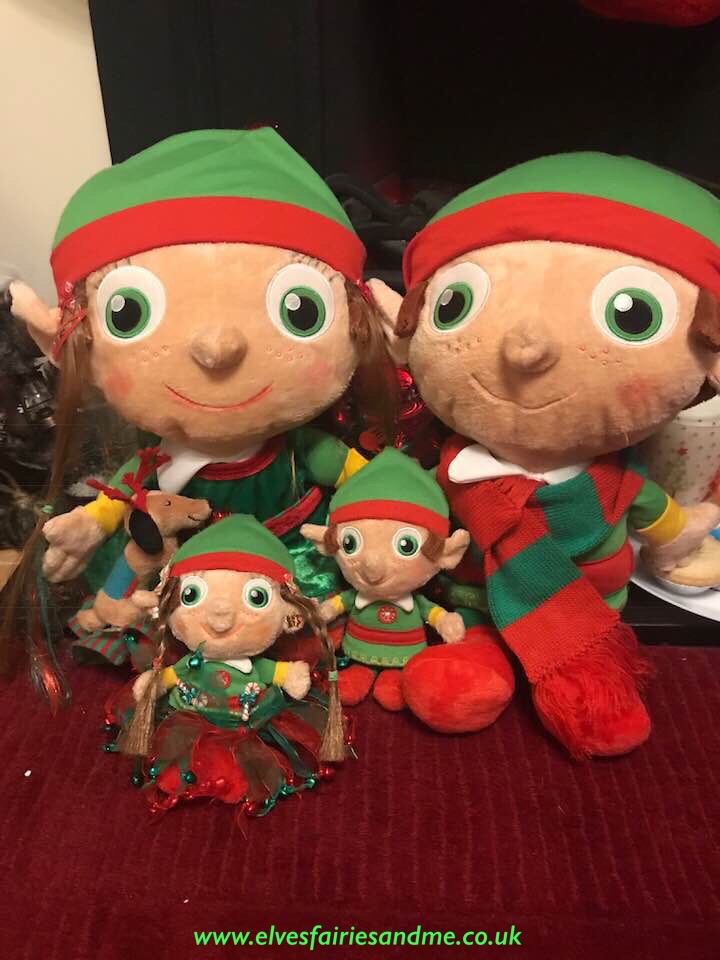 Before Christmas begins and our Elf antics begin I wanted to introduce you to our family of Christmas elves, our own version of Elf On the Shelf.

Back in 2012 I saw a post on a forum I used. It was a post about an elf that stays with you during December and reports back to the North Pole each night. When he returns each morning the children have to find where he is hiding.

It Seemed like a great idea. I had actually been looking for an toy elf, we always have elves visit in the night to put up our tree so I thought this would tie in perfectly with our existing tradition.

At this point nobody I knew was aware of the concept and I hadn’t heard of the official Elf on The Shelf. In 2012 Tesco had various sized elves as part of their Christmas Chilly and Friends toy range. We purchased the smallest size elf, printed his introduction letter and the elves left him in a gift box under the tree when they finished putting up our tree.

The first year was very simple Chily went to the North Pole each night and the children found him in various places each morning. At this point we still weren’t aware of the official Elf On The Shelf or the rules around touching the elf. Before Christmas was over we went back and bought the medium and giant elves to put away for the following year.

By Christmas 2013 we had started to see some of the antics other elves were getting up to. I heard about the North Pole breakfast and when Chilly returned he brought a breakfast with him. At this point we didn’t have a table so it was a very simple affair, picnic style on a tablecloth on the floor.

We did our first antics during the second Cristmas with Chilly. We introduced our elf door and Chilly’s Dad Chillier (the medium sized elf) arrived to keep an eye on him.

The giant elf was later introduced as Grandpa Chilliest and had some grey hair and glasses added to age him. He usually visits our other relatives during December.

A few years down the line I managed to get another couple of the elves on ebay and we were visited by Chilly’s sister Chillyette and his Mum Chillyeena makes an occasional visit to make us all peppermint bark.

Due to the no touching rule (if you touch elves they can lose their magic) we only allow the children to cuddle them goodbye on Christmas eve, they look forward to this. One Christmas Eve whilst we were outside looking at the sleigh fly over (International Space Station) a new elf appeared in our living room with a letter from Father Christmas, explaining he was an elf who had lost his magic and hadn’t been looked after by his last family. Father Christmas was sending him to live with us to care for all year and if we were very kind to him he may get the occasional bit of magic back. Noel is a wonderful all year round elf. The children can play with him, he comes on holiday, dresses up for birthdays, helps with tooth fairy duties and when the other elves are around he has enough magic to join in with their antics.

So that is how we ended up with not one elf on the shelf but an entire family.

Now the elf is a huge tradition for many families. There is no longer a shortage of elves to chose from so you can find an elf or two that will suit your family, it doesn’t have to be the official elf and you can follow your own rules and create your own traditions.